Open Art is a non-profit cultural association dedicated to promoting creativity, social inclusion and solidarity through artistic and cultural activities. It is made up of artists from different disciplines with a notable international career.

On a cultural level, Open Art is characterized by transmitting values ​​of equality, equity, interculturality, innovation and sustainability.

Its mission is to contribute to social transformation through art and culture.

Open Art has benefited by highly prestigious grants. Among the most outstanding projects that have been benefited are: Banco de Objetos circular economy project, which received a grant from Barcelona Activa  in 2018-2019; Tendencia Arte Objeto was awarded by Culture from Barcelona, ​​2019; Fusión Gramenet (an Intercultural Forum in Santa Coloma de Gramenet, Barcelona) has benefited from Obra Social la Caixa from 2017 to date;  Videolvalores Somos Multiculturales (2018) and Club de Cinema Gramenet (2017-2018) have been supported by the Santa Coloma de Gramenet City Council.

Open Art has supported books of great artistic quality that are characterized by their innovation and social impact. Among the most outstanding are: Evil Doesn’t Live Here: Posters from the Bosnian War (in development) by Daoud Sarhandi and Cine Step by Step by Carolina Rivas.

Currently, Open Art has two headquarters, one in Santa Coloma de Gramenet, and the other in Sinergics Coworking in Baró de Viver (a priority action neighbourhood of Barcelona). Open Art, has the added value of reaching the public through innovative artistic and creative projects impact  the future. 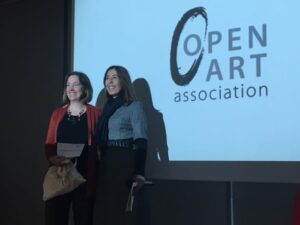 Open Art has received the MIT Making Impact for Tomorrow 2019 award granted by the Henkel Foundation, Germany, for the Banco de Objetos project.

Open Art was founded in 2015 by the filmmakers Carolina Rivas and Daoud Sarhandi as an extension of Creadores Contemporáneos, an internationally recognised autor film producer, with the aim of establishing in Barcelona a space for multicultural and social creation of international projects, promoting cultural projects of social impact, and making films under innovative audiovisual formats.

Defender of human rights, Open Art promotes a new generation of filmmakers who are at risk of social exclusion to create artistic works. With an interdisciplinary approach to cooperation, diversity and solidarity, and with a contemporary vision for Europe, Open Art is linked with other international humanitarian and cultural organisations and entities.

Combining emerging social issues with the creation of art, especially filmmaking, Open Art has developed films as an instrument of intervention and social transformation. It recognises the social value of multicultural cinema as a tool for citizen integration.

On the subject of conflict, Open Art has collaborated with public and private entities in Palestine for the making of the film, The Colour of Olives. On the subject of migration, it joined forces with migrant support associations in Mexico for the film Lessons for Zafirah, focused on the Mexico-United States migration phenomenon.

On the subject of unemployment in Spain, Open Art launched the Videovalores campaign in collaboration with Obra Social “la Caixa” and prestigious film and cultural entities, in order to give audiovisual and ethical training to unemployed young people in Barcelona, culminating their apprenticeship with the realization of a short film that transmits a universal value.

In theatre, Open Art created the Contemporary Actors Company, in order to give employment in both theatre and cinema to new talents of various nationalities and create critical works on current issues. The Company created The Story of a Tree, whose theme is focused on the migratory phenomenon to Europe.

Members of the Board of Directors

Carolina Rivas: President of Open Art Association. Graduated in film direction at the National School of Cinematographic Art in Mexico (2010). She has completed studies in Social Economy in Foment y Formacio (2018) and Social Entrepreneurship in Barcelona Activa (2019). She has extensive experience in the audiovisual sector, having made films such as The Colour of Olives (Mexico/Palestine, 2006) that have been the subject of international awards. In the social sphere, her social projects have generated social impact, such as the Banco de Objetos project that won the MIT (Making Impact for Tomorrow) award by the Henkel Foundation, Germany. She is a leader in organizing cultural events integrating people at risk of exclusion. Her entrepreneurial projects have been awarded prestigious grants. Among those that stand out are Videovalores (2015) and Fusión Gramenet (2017-2020), both subsidized by Obra Social “la Caixa”. Banco de Objetos (2018) was subsidised by Barcelona Activa and Tendencia Arte Objeto (2019) was supported by the Institute of Culture of Barcelona.

Oscar Ceresuela: Secretary. Degree in Computer Engineering from the Autonomous University of Barcelona, ​​with studies in computer security, cryptography and geography. He has also studied History at the U.N.E.D. He develops technological infrastructure and contingency plans in large companies. With IT development experience in Project Manager, a consultancy from Sabadell implementing technology and helping small companies with few resources. Experience in managing social networks and web maintenance. Volunteer in social entities since 2017.

Hirotoshi Kikuchi: Treasurer. Musician and communication manager. Graduated in Sociology from Meisei University, Tokyo and Music and Opera Pedagogy from Showa Conservatory in Tokyo. He is a singer of the Orfeo Catala choir at Palau de la Música since 1996. Volunteer workshop for the third sector on origami issues, Japanese cuisine and communication management (social networks, web maintenance, marketing. In his experience with the association he has managed to develop procedures administrative, communication and volunteer management.

Andreu León de Cabo Sindín: Member. Expert in electronic and computer repairs. Technical studies in electronics at the Universidad del Trabajo, Uruguay, and a senior technician in Unwrapping of electronic products at the Escola de Treball, Barcelona. He has taken various training courses in constant repair. He has worked as a Telecommunications technician on TMB buses since 2003. He has been the workshop driver at the Repair Café of the Open Art Association since 2019 and has been a workshop specialist for Barcelona Restarters since 2015. He has taught repair workshops for electrical appliances and computer equipment since 2015 in various circular economy associations.